Despite an impressive rally in stocks in the final 45 minutes of trading Monday, the S&P 500 Index ended down by 1.7%,  unable to recover fully from the 3% decline reached earlier in the day. Volatility, as measured by the VIX, increased by over 25%. The weakness was broad based, hitting energy and industrials the hardest.

We see Monday’s selloff as a bit overdue but not yet complete. The selloff really began on Friday, September 10, when the S&P 500 broke below a trend line going back to the “COVID lows” of March 2020. The piercing of this line of support means an established trend for stocks has been damaged. It takes time to repair the damage done when a support line is broken. Effectively, stocks need to “recharge” before they can reclaim the trend line and head higher. We believe stocks will meander as they recharge over the next few weeks.

After Monday’s decline, stocks sit 4% below their recent high of 4,545. The 3,900-4,000 level for the S&P 500 Index may be tested before stocks find firm footing to mount a rally. This would represent a 10% decline for stocks and perfectly normal to see at this stage of a recovery.

In the coming days, CNBC, Bloomberg, Fox Business, etc., will ask every guest if stocks are heading for a freefall or if the selloff presents a buying opportunity to buy stocks. We do not think a freefall is imminent, yet the real buying opportunity will not arrive until something very basic happens. Everyone who wants to sell stocks needs to finish selling before stocks will rally. We expect selling to subside in the coming days or weeks, which will lead stocks to rally into the end of the year.

As Monday’s selloff gained momentum, I was reminded of the cinematic classic Casablanca. In it, Claude Rains’ character, Captain Renault, witnesses Humphrey Bogart’s character, Rick Blaine, shoot Nazi Major Strasser dead. When officers arrive to see the Nazi officer lying dead at the feet of Renault and Blaine, who are clearly the witness and the murderer, Captain Renault says, “Major Strasser has been shot! Round up the usual suspects.”

Like the officers under Captain Renault’s command, the news outlets will choose to go chasing after the “usual suspects” of inflation, taxes, China, COVID, seasonality, etc., rather than the obvious suspect standing right in front of them…. profit taking. Sometimes stock markets look for a reason to selloff. Not because of any fundamental reason tied to the economy, but just because there is an absence of buyers.

Yesterday’s “China” suspect came in the form of that country’s largest real estate investment company. Evergrande defaulted on payments to its creditors which spooked investors who fear it is a sign that it is the tip of an iceberg. We do not think this is the case as there is no evidence a bankruptcy or bailout of this company by China would have ripple effects for the broader market. Its size simply does not suggest it can have such an effect.

Inflation is a usual suspect these days as investors worry that a return to “stagflation” is ahead. Stagflation characterizes an economy that is stagnant with elevated levels of inflation. Our view is that growth will not stagnate. Instead, we see growth remaining elevated for the foreseeable future. We think the rise in inflation will prove to be transitory. Further, we think the inflation that does persist will be tied to productivity gains and therefore not detrimental to the economy.

An example of this type of inflation can be found in the Ford case study from the early part of the 20th Century. Henry Ford both raised wages to an unprecedented $5 a day and shortened the work week at the same time. The result was higher wages and increased productivity while having a negligible effect on inflation. This is closer to what we expect to see than run-away inflation eroding purchasing power and slowing the economy.

The COVID suspect is certainly an obvious one. The Delta variant has afflicted far more people this year than what we experienced last year at this time. However, there is nothing close to the same reaction to the virus this year as what we saw last year. The economic recovery from last year remains intact and the Delta variant will not derail it.

So, none of the “usual suspects” are any more guilty at causing Monday’s selloff than they are responsible for the rally we have seen this year. We do think seasonality is at work as you will see in the charts below. The technical picture is looming heavy on stocks more than fundamentals. This is less concerning to us than an impending recession would be.

A recession is coming, but we believe it holds off until the midterm election has come and gone. We need for this recovery to be longer in the tooth and see the Federal Reserve taking the aggressive move to raise interest rates as opposed to just jawboning a tapering of asset purchases.

Ultimately, we do not see any internal indicators that suggest the economy is on the brink of recession or that the stock market is telling us another collapse lies ahead. Let us look at some charts we think tell the story of a market that is far from falling off a cliff.

The first chart shows Real GDP has almost fully recovered to the pre-COVID level of $19,215B. During the Great Recession, it took almost 3 years for the economy to recover to the $15,762 level. The speed of recovery is impressive and carries with it momentum to carry the economy higher. 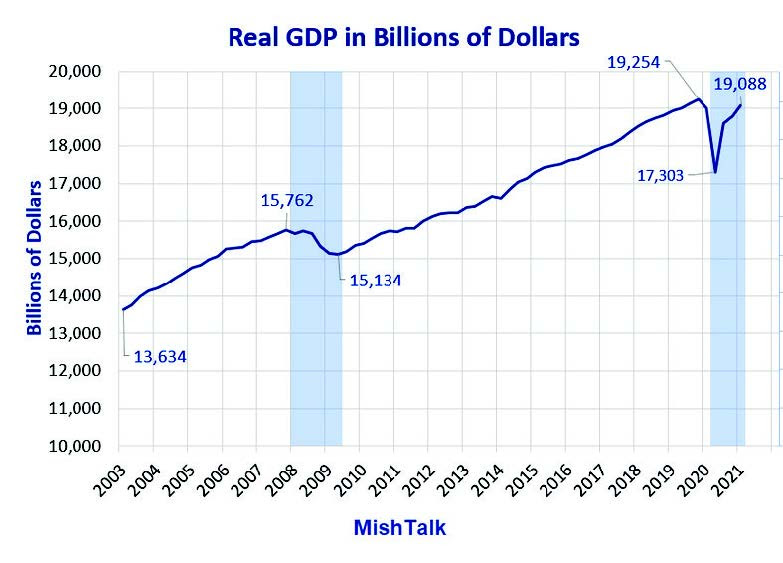 The next chart shows the personal savings rate as a % of disposable income. It is important that investors have savings if they are going to invest. Further, since the U.S. economy is driven by consumption, consumers need savings to spend. While the savings rate has dropped from the unprecedented level of 34% immediately following the onset of COVID, it remains at a level higher than that following the Great Recession. These savings act as fuel to drive consumption and investment. 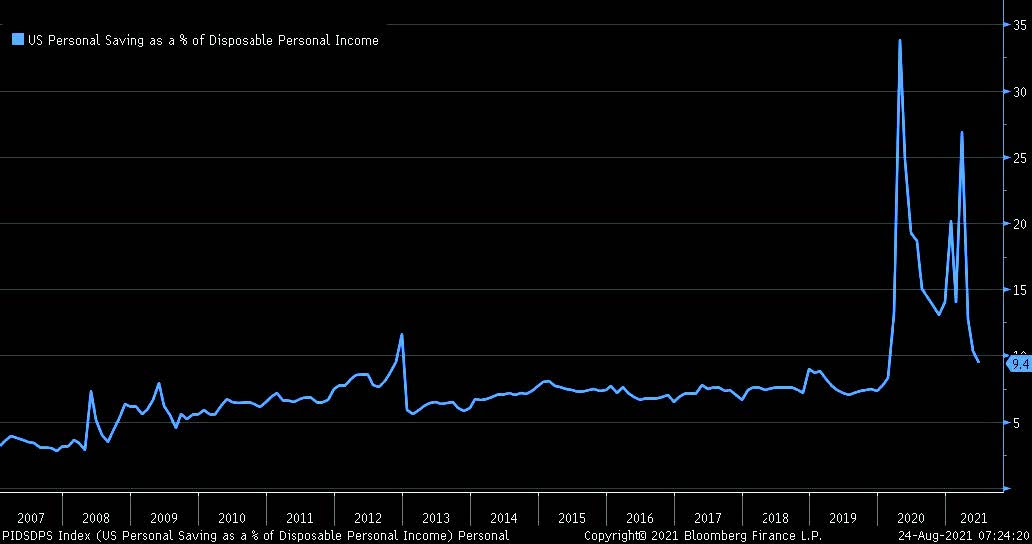 The next chart looks at periods, since 1942, when the S&P 500 Index has seen more than 250 sessions without touching the 150-day moving average. These are periods when stocks have been consistently strong for an extended period. The current rally has seen an increase of almost 49% over 303 trading sessions. The “Peak-To-Trough Decline” column gives us a view at what has happened following the break below the 150-day moving average. The average decline is just over 10%. As we suggested earlier in this commentary, a 10% decline would be perfectly reasonable to expect. Past results do not guarantee future results. 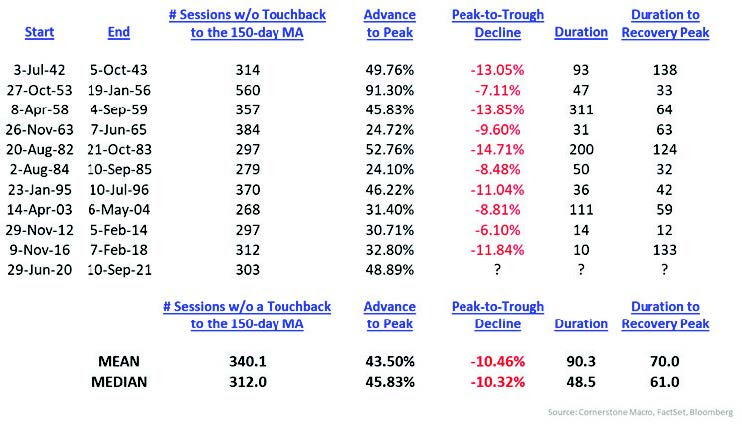 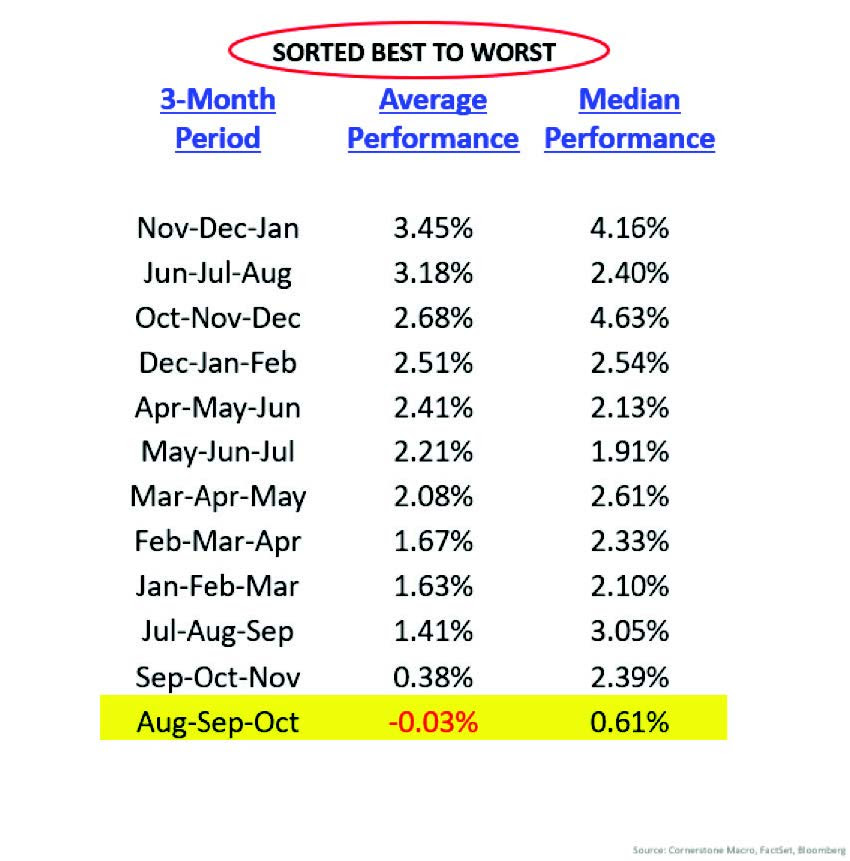 In conclusion, we expect volatility to remain elevated for the next few weeks. This will accompany a grind lower in stocks toward the 4,000 level for the S&P 500 Index. This would represent a 10% decline from the 4,545-peak reached earlier in the month.

I have maintained elevated cash levels in our managed accounts to be prepared for such a decline. I have been sharpening the pencil in search of companies that have stock we would like to own at lower prices. As those opportunities present themselves, we expect to bring cash levels down to be fully invested heading into the end of the year.

All information above is believed to be from reliable sources; however, we make no representation as to its completeness or accuracy. All economic performance data is historical and not indicative of future results. The market indices discussed are unmanaged. Investors cannot invest in unmanaged indices. Certain statements contained within are forward looking statements including, but not limited to, statements that are predictions of or indicate future events, trends, plans or objectives. Undue reliance should not be placed on such statements because, by their nature, they are subject to known and unknown risks and uncertainties. Please consult your adviser for further information.

Opinions shared are not intended to provide specific advice and should not be construed as recommendations for any individual. Please remember that investment decisions should be based on an individual’s goals, time horizon, and tolerance for risk.