It is easy to describe the current political and economic environment as unique. After all we have a president who, regardless of your political stripes, is carrying out his duties in a way that has not been seen for quite a while. Concerns over internet privacy has captivated investors. Interest rates are now trending higher from the lowest level in the history of this country. “Tariff Talk” has captured headlines around the world. The financial crisis of 2008/9 (seems more like 2 weeks ago) is still fresh on the minds of many investors. Mergers and acquisitions have made headlines throughout the year with the Time Warner and AT&T merger topping the list of late. The list goes on.

Despite all of these “risks”, which are easy for even the casual observer to see, the S&P 500® Index is up just over 6% since the beginning of the year. Not a record-setting pace of gains for sure, yet better than most might expect given these headlines. Sometimes the “facts” don’t line up with the “feelings”.

Now, we have “Facebook Wednesday” following a 20%+ decline in its stock price after it reported lackluster growth on its conference call Wednesday night. A label that calls to mind “Marlboro Friday” which occurred on April 2, 1993. I remember this day well as I was just about to celebrate my 1st year in the investment business. It was shocking to me that a company this large could fall so fast. It was a day when Philip Morris, the company behind the Marlboro brand, saw its stock decline by 20% in one day.

The decline was prompted by Philip Morris’ decision to slash prices for its flagship product. This marked a shift in the market away from high-priced brand names to lower-priced competitors. By slashing prices, Philip Morris was better able to compete with these companies. It also forced many of their name brand brethren, who could not match the price cuts, out of the market all together. An important point I will revisit.

Facebook is a holding in one of our managed strategies, so we are watching the price action in the stock closely. Furthermore, because Facebook is such a prominent company, it warrants paying attention to how things shake out for the company to see if there is spill-over into the broader market.

Successful investing involves being contrarian at the right time. To assist in this process, I look for events that have occurred in the past and find similarities to current events. Finding what is similar is much harder than the differences. Therefore, identifying similarities is more valuable when it comes to our research. In the case of comparing “Marlboro Friday” with “Facebook Wednesday”, the differences are obvious. One is a tobacco company while the other is a social media giant. One event occurred 25 years ago while the other happened in this “new” political and economic environment. Because these differences are easy to identify, they are of little value when making the comparison.

It is understanding the similarities between these two companies that is harder and therefore more important. These similarities include, 1. Global brand, 2. Category leader, 3. Under regulatory scrutiny, 4. Recent reports suggest usage has peaked. The list goes on, but our focus is on the price action of the stock. Below is a chart showing the price action of Philip Morris (Now called Altria Group.) following Marlboro Friday. Note the sharp decline followed by a steady recovery. This happened despite data showing a decline in tobacco use, reduced prices, and increased competition. The news of the death of the largest tobacco company back then proved greatly exaggerated. I think the same is true for Facebook. 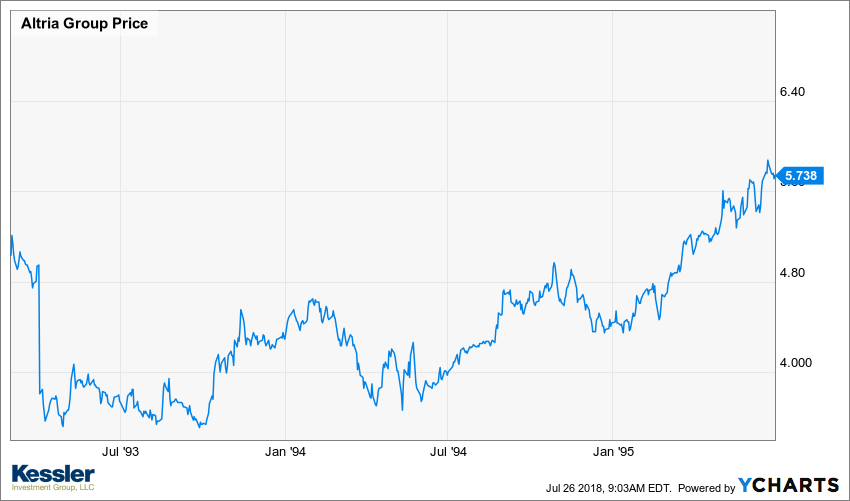 The broader question I am focused on is whether this event is idiosyncratic to Facebook or if it is a “canary in the coal mine” suggesting a similar decline is in store for the whole stock market. I  believe the issues are Facebook’s alone and not a sign of weakness throughout the technology sector or even the broader market. To this end, I made the decision to increase exposure to Facebook stock following this decline in our Dividend Income strategy.

Sure, I wish I would have sold Facebook stock at its peak price before earnings were released and then bought it back on Thursday morning. Because crystal balls are not real, it is not our concern to make serious judgements based on guessing. The fact is Facebook is still an extremely profitable company and the leader among social media companies. It is also popular with younger users by way of Instagram, which they own. Advertising continues to shift to social media outlets and away from television and print. So, adding to our Facebook position makes more sense than selling after such a selloff.

Overall, I remain cautious as we move through the 3rd quarter. History suggests this quarter during the midterm of a first-term president can be rough. Interestingly, history also suggests the 4th quarter of the same year can be very strong.

The underpinnings of the economy remain solid. Earnings continue to come in strong for Corporate America. Despite the headlines surrounding tariffs, concerns about Fed policy and any number of other geo-political risks, stocks are holding up very well. In other words, stocks have had every opportunity to decline and yet they are up on the year. This is a sign of a market that “wants” to go higher. I believe it will……for now. I will remain vigilant in looking for evidence of price weakness ahead.