Markets have started the process of healing from the initial shock of the pandemic. On March 23, stocks reached a low that we believe will hold and not be breached to the downside. The low on March 23, a Monday, was marked by widespread panic and dislocation in stocks and bonds. The day before, Congress fell short of passing a bill to provide economic stimulus. This inaction was not received well by markets and stocks responded accordingly.
In response to both market weakness and the inability of Congress to enact fiscal stimulus, the Federal Reserve stepped in with its own monetary stimulus. Later in the day, Congress calmed markets by suggesting that a deal was imminent to deliver fiscal stimulus. So began a process to deliver unprecedented levels of fiscal and monetary stimulus designed to prevent a new depression. This forceful response caused stocks to reverse course and on Monday, March 24, they spiked higher and have not looked back.
To date, over $12 billion has been committed by Congress and the Federal Reserve to the effort to stave off a depression. To essentially breathe financial “air” into the “lungs” of individuals and corporations while all of us hold our “breath” during this crisis.
Unlike the Financial Crisis of 2008/9, there is no financial “villain” this time. Back then the “villain” came in the form of banks and insurance companies. This time around, the target of the financial stimulus is not large financial institutions. Instead, it is an even larger entity, the U.S. worker and their employer.
If there is a “villain” during this crisis, it is certainly COVID-19. However, no stimulus package is going to “slay” this kind of villain. The target of the stimulus is the economic fallout from the virus rather than the banking system. This makes it more difficult to “fix” as the target is harder to home in on.  A balance must be struck between keeping the economy from sliding into depression while urging people to stay home. Social distancing and sanitizing would do the trick if all of us were able to simply shelter in place with no need for supplies or income. However, we must procure supplies and generate income. It is a difficult balance, to say the least.
Our belief is that the stimulus will prevent a depression but not a recession. Assuming that economic activity begins to increase soon, we will begin to see how much damage has been done to the economy. One thing that must be underscored is that markets have functioned extremely well while feeling only a few stress points along the way. The banking system is strong, and the economic “plumbing” of the U.S. economy is solid. These truths were not so during the Financial Crisis 12 years ago.
When looking at the last great pandemic to affect the U.S. (Spanish Flu, c.1918), we see a stock pattern that resembles the one we have today. As you can see in the first chart, the Dow Jones Industrial Average stood at 98.58. It then fell 33.47% to 65.95. Following a sharp drop, sometimes stocks will bounce back half the distance. A 50% recovery from the 65.95 low would be 82.27. As you can see in the chart, stocks bounced to 82.08. From this level, stocks traded in a range between 89 and 75 for the next year.

The second chart shows recent stock market performance. Prior to the pandemic hitting the U.S., the S&P 500 Index stood at 3,386. It then fell 33.93% to 2,237. A 50% recovery from the low would take the Index back to 2,811. As of Friday, the Index stands at 2,874. Does this mean stocks will trade in a range for the next year as they did through 1919? Of course, no one knows. But we will certainly find out over the next year. What is different this time? Well, a World War was raging at the time of the Spanish Flu and no coordinated monetary and fiscal stimulus was injected into the economy. Further, the U.S. suffered 650,000 deaths as a result of the pandemic. 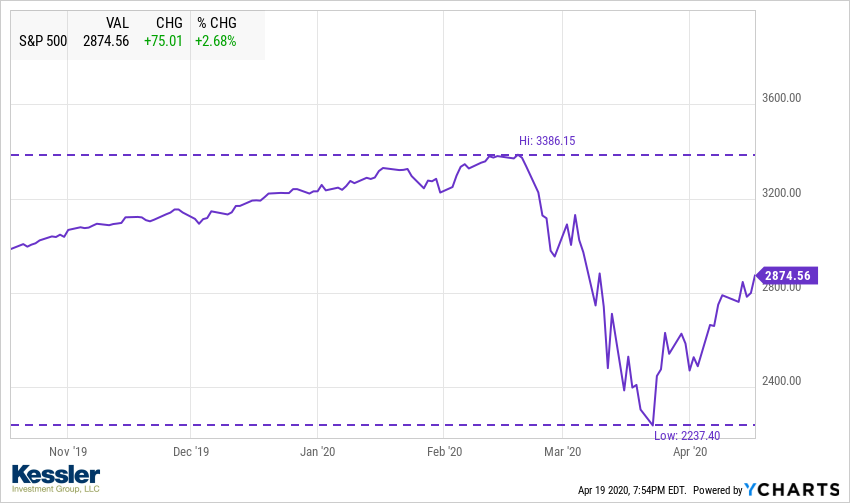 As can be seen in the first chart, stocks rallied significantly after trading in a range following the 50% recovery. This might be attributed to not only the pandemic running its course but also due to the “peace dividend” following the end of World War I. What is also worth noting is that stocks never traded back down to the low of 65.95.
While we do not know if a similar pattern will play out in the weeks and months to come, we do believe the lows for stocks are in. The force and size of the monetary and fiscal stimulus packages cannot be overstated. It will have an effect well after the country gets back to work. This is why we think there is a real possibility for stocks to rally significantly as this stimulus (capital) finds its way into risk assets.(Past performance does not predict future results.)

On a final note, we welcome anyone interested to watch our weekly review of the market. Please watch for our Zoom video invitation to watch live or on demand.