We believe it is important to understand why this is the case. Why are stocks down only 7% when we are seeing economic data that eclipses that which we saw during the Great Depression. The answer, we believe, is summed up in one word; “liquidity.”

The actions of the government (fiscal stimulus) and the Federal Reserve (monetary stimulus), has injected an unprecedented amount of liquidity into the market. This liquidity has come in the form of cash payments to individuals, deferred payments on student loans, purchases of stressed debt, lower interest rates, etc.

Additionally, corporations have stepped in to provide liquidity. When Bank of America (along with many other banks and financial institutions) decided to offer payment deferrals to their credit card and mortgage customers, this acted as a form of stimulus to the economy…..at their expense.

Furthermore, while liquidity plays a significant role in stimulating the economy, there are other factors that influence investors that should be understood. Notably, we see the COVID event as something closer to a transitory event, like a “natural disaster,” than a structural event like a “depression.” This means the “event” will be over quickly as opposed to a structural collapse.

Will the fiscal and monetary stimulus be enough to bridge the gap between the shutdown of the economy and its return to “normal?” It is too soon to say, but we think so.  Since the beginning of March, approximately 10% of U.S. GDP has been lost due to the shutdown. Between the Federal Reserve and Treasury, approximately 14% of GDP has been injected into the economy in the form of stimulus.  This means there is a real chance it will be enough. At least enough to prevent a depression or even a severe recession.

The Federal Reserve deserves a lot of credit for the speed and aggressiveness of its response to the crisis. That stocks have rallied more than 38% from the day Chairman Powell told the world that the Fed would do whatever was necessary to prevent a depression, is proof of this.

The question on the mind of many investors is whether stocks are poised to “crash” under the weight of the economic damage done by quarantine or rally to all-time highs on the back of the unprecedented stimulus? Why not both? Since a “crash” has already happened (March 2020), it might just be the case we see all-time highs later this year. There is a reason why Mt. Whitney, the highest point in the U.S., is near Death Valley, the lowest point in the U.S. Extremes tend to congregate whether it is in geological or economic terms.

Whether stocks hit new highs this year or not, the fact remains that stocks have bounced back in dramatic fashion from the low on March 23. Below we look at a few charts we think help frame the explanation for why this is.

In this first chart we see a spike in month-over-month personal income. The rate of increase is the greatest in more than 70 years. This is despite a shuttering of the economy and an unemployment rate in excess of 20%. 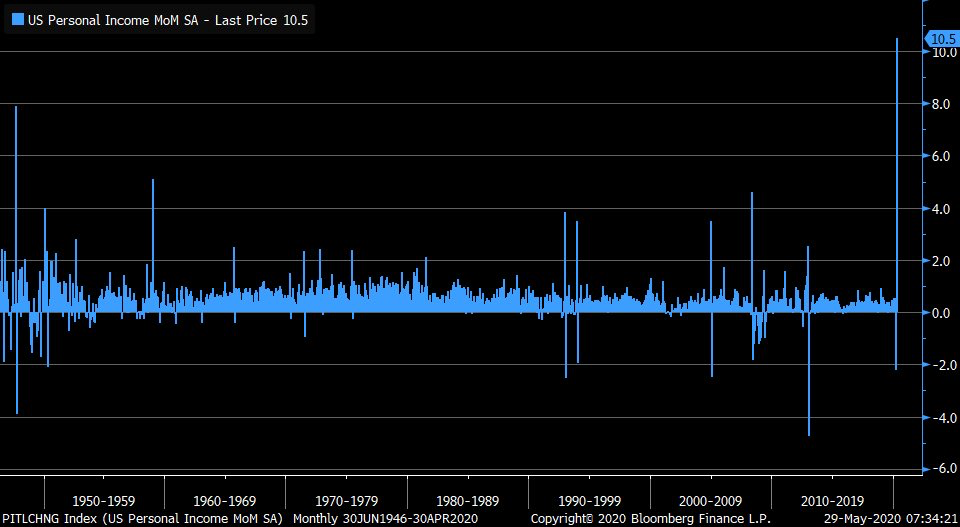 This chart shows a decline in consumer spending that dwarfs any period over the past 60 years. So, despite an uptick in income, consumers reduced spending across the board. 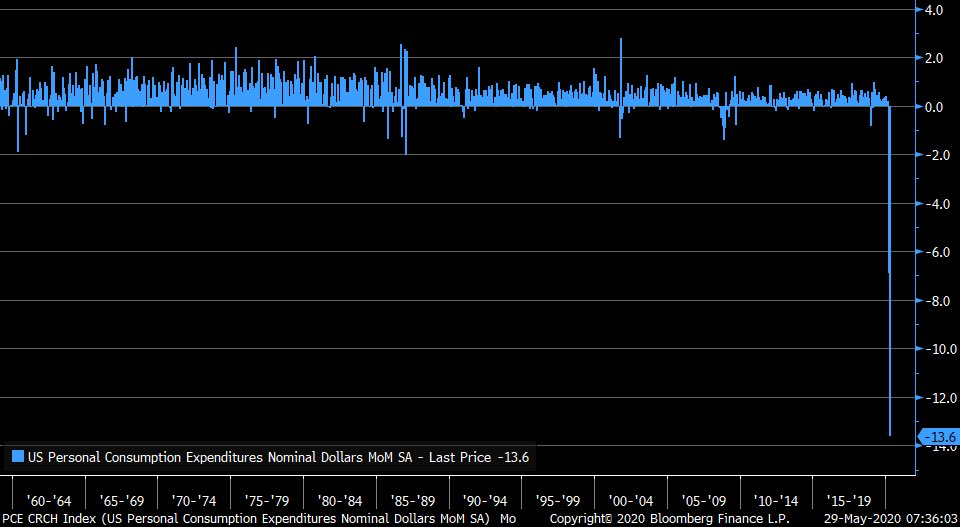 Spending Collapse and a Spike in Income

In the chart below, brings together the previous two charts. It shows how spending and income typically track one another closely. Not this time. It clearly shows that consumers froze in response to the pandemic and despite spike in income. When this happens, it should lead to an increase in the savings rate. 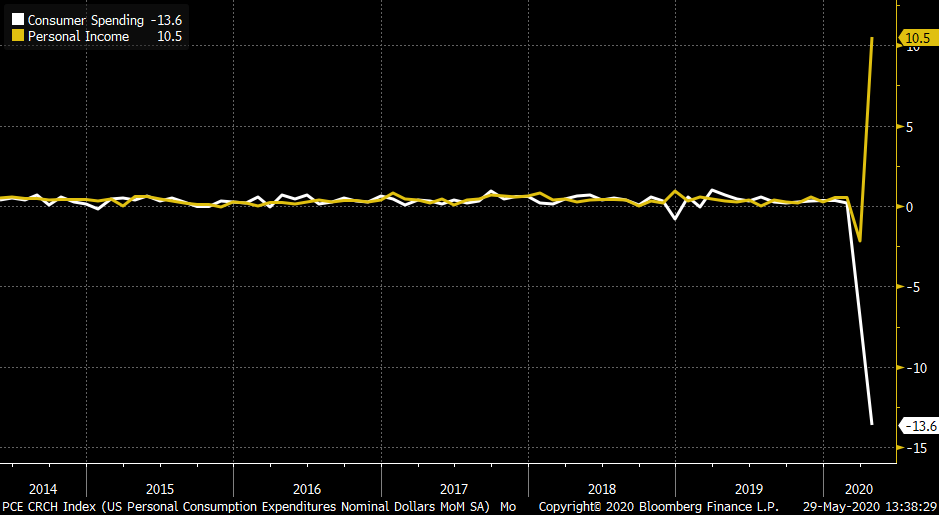 During the years noted by circle #1 (early 1970’s), personal savings increased. This period was marked by economic weakness, high oil prices, political turmoil, and rising inflation. The savings rate declined steadily until it bottomed ahead of the Great Recession in 2009. This period is highlighted in circle #2. After this “near death” financial experience, individuals ratcheted up their savings. As a result of the pandemic, savings skyrocketed to levels more than double that of the early 1970’s. This is shown in circle #3.

So, with these charts, we see that consumers have frozen spending, increased savings all while seeing an uptick in income. The answer to the question, “Where did the increased income originate?”, is Uncle Sam, that is where.

The $2.3 trillion CARES Act along with enhanced unemployment payments, forbearance from landlords, banks and credit card companies has allowed individuals to not only “stay afloat” during this shut down, it has increased liquidity. It has increased the amount of available liquidity above what would otherwise have been available sans the pandemic.

This helps explain why the number of businesses going bankrupt has been limited (so far), why car sales are brisk, new home sales are strong, stocks are rallying, and inflation is starting to appear. We are now in the “show-me” stage of the recovery. We expect plenty of opportunity ahead.

In conclusion, we expect the S&P 500 Index to hit an all-time high this year. Volatility will remain an enemy of discipline. For our clients, we will remain disciplined, attentive and humble as we navigate markets on their behalf.