Today, the Federal Reserve lowered rates by 0.50% in a “surprise” move before its regularly scheduled meeting later this month. This is the first time the Fed has made such a move since 2008 during the Financial Crisis.  It was done to get ahead of the effects of the economic slowdown headed our way as a result of the Corona virus.

One way to think of the behavioral effect is to consider what happens when a run occurs on a healthy bank. Once the run begins it makes no difference that the bank is solvent and healthy. The hysteria leads to massive withdrawals and a self-fulfilling prophecy is the result.

Make no mistake. The virus is real and some who have contracted it have died. What makes its effect more dramatic than that of cancer or influenza or diabetes or other deadly illnesses is that this is a pandemic and not an epidemic. Pandemics are rare while epidemics are more familiar. Think airline crashes versus automobile crashes. One happens rarely and affects a small number of people while the other is a more common occurrence that kills many more people. As a result, the masses react differently with a pandemic than they do an epidemic. This is what matters to the economy and markets.

So, we have a health crisis that has morphed into a financial crisis. What now? Well, the good news is that the virus should run its course by the end of April. However, enough damage will be done to the economy by then that the effects must be acknowledged. The biggest question if the ripple effects of consumer and supplier behavior will lead to a recession.

We feel that most of the market effect has been felt. Yes, we will likely see stocks spike up and down while ultimately muddling around for the next few weeks. However, most of the downtrend, we believe, has occurred.

The chart below does a good job of showing just how strong the pandemic’s effect has been on the market. As you can see, it is rare for stocks to decline 10% week-on-week. This has only happened 6 times since 1930. Coronavirus is associated with some of the most devastating economic events over the last century. That it gained notoriety in only the last 3 months speaks to how significant this event is. 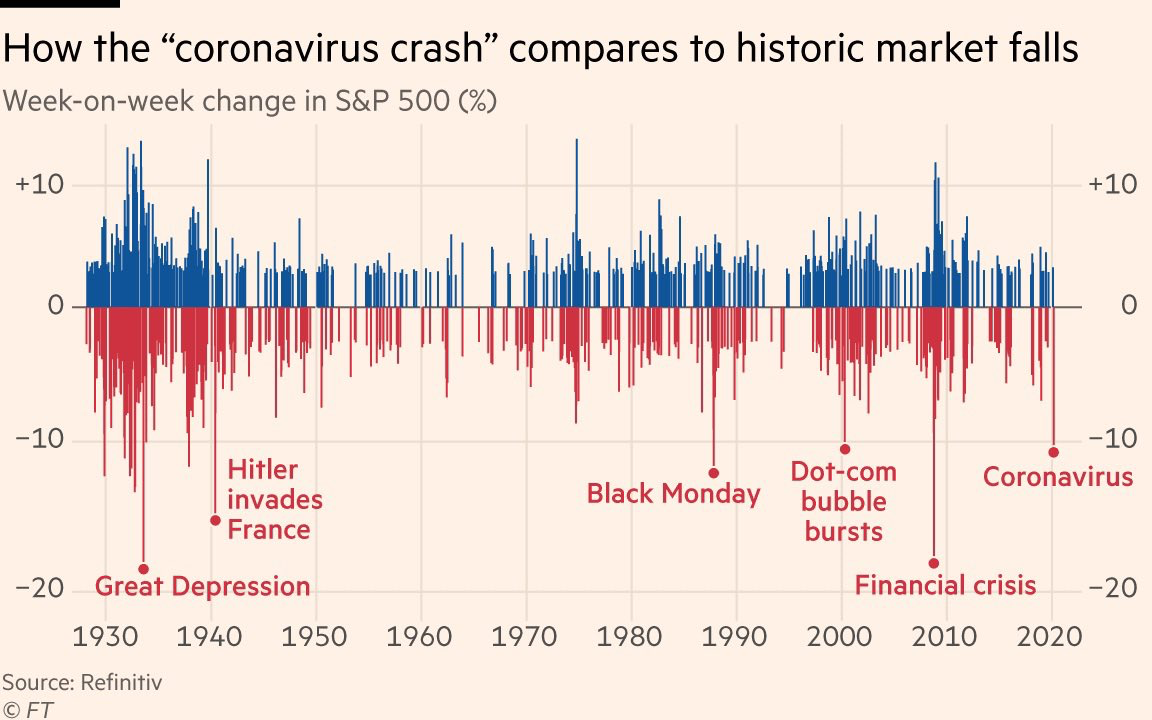 The one thing every event listed above has in common is how stocks reacted in the months and years to follow. There is no guarantee that past performance predicts future results. So, it is important to keep this in mind in the weeks and months ahead.

There are a few factors lining up that suggest to us stocks are poised to rally in a strong way and soon.

So, we encourage clients to remain patient as this plays out. Investors who sell into this volatility may feel comfortable for a short period but it might not be long until stocks regain their footing and head higher. This could leave investors with the prospect of buying back into stocks at a higher price or frustrated by never getting back in at all.

For our managed accounts we have taken advantage of the selloff by using the cash we raised in January during the run-up to buy stocks. We have purchased a major media company with a dominant streaming service, a leading industrial company, an energy company and a technology company. This leaves us with enough room in the portfolio to add one more stock before reaching a “fully invested” posture. This shows our conviction that, while stocks may dip further, the selloff has given us the opportunity we were looking for to buy.