The fourth quarter of 2018 has seen an uptick of volatility along with a decline in stock prices. There is a lot of confusion and concern on the part of investors who fear that 2019 will see a continuation of this decline. I would like to offer our view of what has led to the recent market volatility and what to expect in 2019.

To begin, it is important to understand that the economy is in the final stages of recovery from the Financial Crisis of 2008. Essentially, it is being “weened” from the financial stimulus applied by the Federal Reserve by way of monetary policy. Just like a patient who comes off life support, the transition to a normal environment can be stressful. The economy is making such a transition from being hooked up to full monetary stimulus to none. Anyone who has been under the effects of anesthesia knows that some nausea and weak knees follow the surgery before you are fully recovered. The economy is feeling this same effect.

There are two types of economic policy, Monetary and Fiscal. Monetary policy is handled by the Federal Reserve and involves controlling the money supply and interest rates for the country. Fiscal policy is enacted by Congress and the President through legislation designed to create jobs, lower taxes and/or increase spending by consumers and corporations.

In 2008, Congress and the Presidents’ (Republican AND Democrat) did not deliver much in the way of fiscal stimulus. The Federal Reserve, which is apolitical, stepped in to do the heavy lifting necessary to push the economy out of crisis. It did so in dramatic fashion. By acknowledging the failures of monetary and fiscal policy during The Great Depression, the Fed set out to essentially do the opposite. In other words, instead of raising interest rates, increasing tariffs and increasing regulation, the Fed lowered interest rates and bought assets.

Lowering interest rates to zero is meant to entice banks to borrow money and lend it out. Think of it as pressing the gas pedal to the floor of your car. It is meant to speed up the economy. This will help to increase the velocity of money in the economy and lead to growth. Well, bankers were a bit gun-shy following the Financial Crisis and had little appetite for increasing their risk by writing loans again. Rather, banks were using their reserves to buy low-risk assets instead of lending money.

When lowering rates failed to work as desired, the Fed did something unprecedented, it began to buy all the low-risk assets that the banks were buying to force them to lend. This is called quantitative easing (“QE”) and it has a much more direct effect on markets. To continue with the car analogy, if lowering interest rates is like pressing the gas pedal to the floor, QE is like turning on a tank of nitrous like they do in drag racing cars. It is powerful but cannot be sustained for long periods of time.

Think of a bathtub full of water with the water being capital. Now imagine the Federal Reserve is a balloon being pushed into the water. We all know that when this is done the water is pushed away from the balloon and the water rises. In the case of the economy, by the Federal Reserve buying assets, it pushed capital (water) away from the low-risk assets and toward the riskier assets like corporate bonds and consumer loans. This had the effect the Fed wanted, and the economy began to improve.

Just like our patient who was on life support (as the U.S. economy was in 2008), the economy lived and has been recovering with the help of medicine ever since. Now it is time for the economy to stand on its own and have the medicine removed. This is the tricky part. A balance must be struck between allowing enough “medicine” to be administered while allowing the “patient” to recover without falling back into illness.

This is the predicament the Fed finds itself in. The U.S. economy is as strong as it has been since the Crisis, yet it needs to be “weened” from the medicine (monetary policy) at a rate that helps it continue to recover without sending it back to the “hospital.” With nine interest rate increases since 2016 and a reduction in its balance sheet, the Federal Reserve has been doing a lot to get back to “normal” so that the economy can stand on its own.

In September, Jerome Powell, Federal Reserve chairman, suggested that several rate hikes were ahead, and the economy could withstand such moves. At this point, investors began to fear the Fed may overshoot interest rates and slow the economy down too much. Stock prices dropped in October in response but regained their composure in November as investors expected the Fed would back off their “hawkish” stance on interest rates.

On December 9th, the Fed decided to go ahead with the expected increase in interest rates. This was a bit disappointing to investors, but it was the Chairman’s comments regarding QE that sent stocks lower. The fear is that the Fed does not understand the significance unwinding QE has on the economy. This remains our single biggest fear, too. Our expectation is that the Fed will soften its tone regarding QE and react to changes in the economy accordingly rather than just put their response on “auto pilot.”

So, where do we go from here? Well, the economy continues to grow at a solid rate. This offers support to stock prices going forward. Much of the volatility over the last three-twelve months has been self-inflicted. As cynical as we are about government policy makers, our sense is that fewer self-inflicted wounds affect the markets in 2019.

The economy is showing a few signs of weakness but none that feel ominous. As the chart below indicates, Leading Economic Indicators off little sign of a recession on the horizon. This will help sustain stock prices in 2019.

Following mid term elections, stocks have historically done reasonably well. As the chart below shows, in every case since 1946, the broad stock market has delivered solid gains twelve months out from the election. 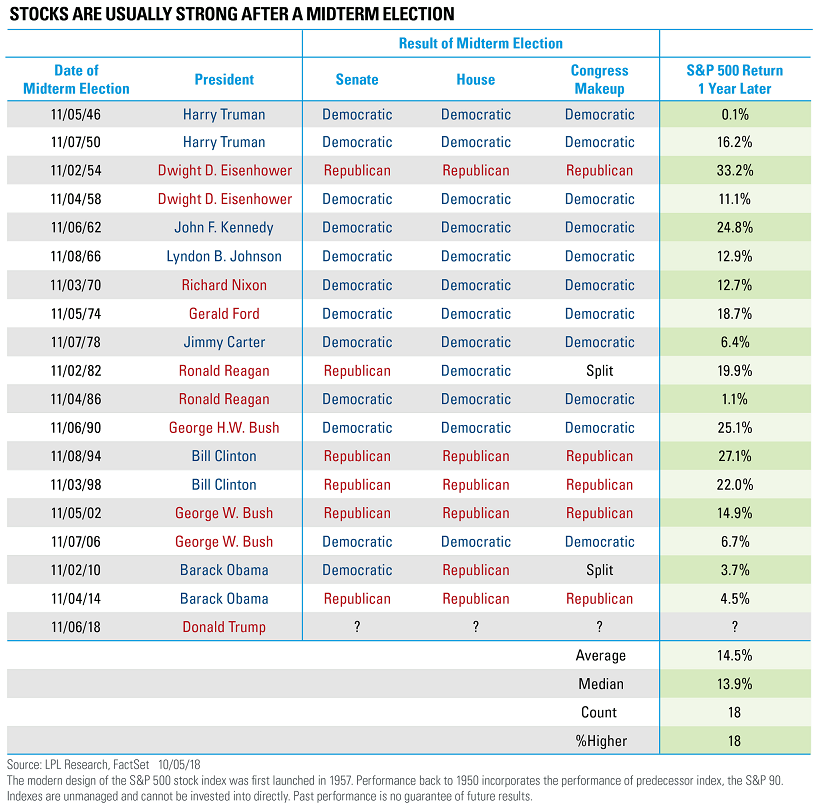 The stock market was on its way to a solid fourth quarter on the heels of making an all-time high at the beginning of October. This quarter may look like a blip on the screen when all is said and done. We believe it will be a very good 2019. Our focus remains on the risks to this outlook, and we will act accordingly if markets get off track, but more positives lie ahead than negatives.

On a final note, January 1 marks the 10-year anniversary of the founding of Kessler Investment Group, LLC. The firm has grown exponentially since then. This growth would not have happened without our clients who have entrusted us to deliver solid investment results and world-class service. We love what we do and will never lose sight that service to our clients comes first.