The performance of the stock market today will undoubtedly catch the attention of the non-business media. So, prepare to see headlines such as “Stocks Sink” or “Stocks Take a Tumble” or “Interest Rates Rise While Stocks Fall” along with other “journalistic gems” of alliteration.

While these headlines point to the fact that stocks declined, they fall short of offering any true insight into the “why” or “what” of the decline. While we reserve the right to be less than perfect in our analysis, we offer the following insights for clients to consider as this market sell off is contemplated.

Today the major stock averages ended the day down by over 3%. Nothing about a 3% decline feels good but there are 3% declines and then there are 3% declines. What is meant by this redundancy is that some declines signal something more sinister than others. We believe this decline is more of the garden variety. The type of decline that refreshes during a long-term rise in stock prices.

What seems to be driving the move lower in stocks is the recent rise in interest rates. More specifically it is the speed at which rates have risen. Below is a chart showing the yield on the 10-year Treasury. As you see, the move from below 3% to above 3% has happened in a short amount of time. What is important to understand is that it is not the actual level of rates that is affecting stocks. Rather, it is the speed at which rates have moved higher.

When rates move higher (or lower) quickly, it can unsettle several market participants. Stock investors are affected by the following:

To further underscore how a spike in interest rates can affect stocks, the chart below shows that this is not the first time in 2018 that rates have risen quickly. Stocks dropped by over 10% earlier this year at a time when rates rose quickly before recovering and moving higher. Will this time be any different? We do not think so. Fact is, we believe it offers the opportunity for investors who are “under invested” to put money into stocks. 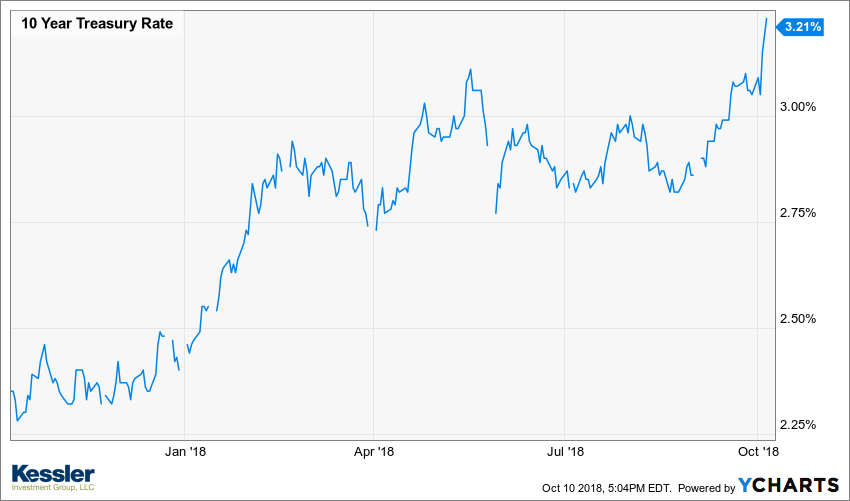 Our optimistic outlook is based on a belief that the recent spike in interest rates does not signal run-away inflation or other systemic risks to the economy. Instead, the rise is tied to the full-on recovery being felt in the U.S. economy in the form of rising wages, rising corporate profits and the bond market’s belief that a recession is not looming.

It is worth pointing out that the Financial Crisis was ignited by a series of 17 rate increases between 2004-2007. While the Federal Reserve has raised rates 8 times since the Financial Crisis it has been done with moderation. We expect this moderate approach to rates to continue. The current chairman of the Fed strikes us as more than reasonable and intent on allowing economic growth to continue.

Importantly, we believe the recent spike in rates is tied more to the side effects of the trade war. This is important as it suggests, once the “war” is over (or subsides), rates will moderate, and attention will return to the economic expansion continuing.

While we see the agreement reached with Canada and Mexico as positive, it is the negotiations with China that affect rates more. There are many critics pointing to the negative implications on U.S. producers and consumers because of the trade war with China. However, as the chart below shows, China is feeling the effects in a more dramatic way. The chart shows that the Chines stock market is down 30% since the trade war began. 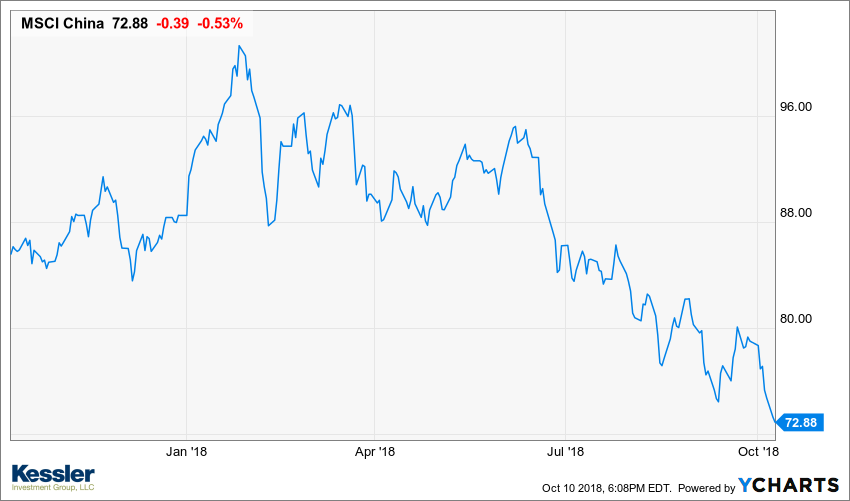 The Chinese have not taken this effect lightly. As the U.S. economy has strengthened, so has the Dollar versus the Chinese Yuan. When this happens, it puts pressure on the Chinese economy as they are a country that still exports more than it imports. A weaker currency means its citizens find it more expensive to buy those goods which are imported. This is somewhat offset by the increase in demand for products produced in China and sold elsewhere. Here is where it gets a little tricky for the Chinese. It is tricky because while a declining currency means their goods are cheaper to global customers, the U.S. (a very large consumer of Chines goods) has levied tariffs on those goods which offsets the “benefit.”. The chart below shows how the U.S. Dollar has appreciated dramatically against the Chinese Yuan since the beginning of the year. While U.S. multinationals are feeling a negative effect from the strengthening dollar, China is feeling even more pain. 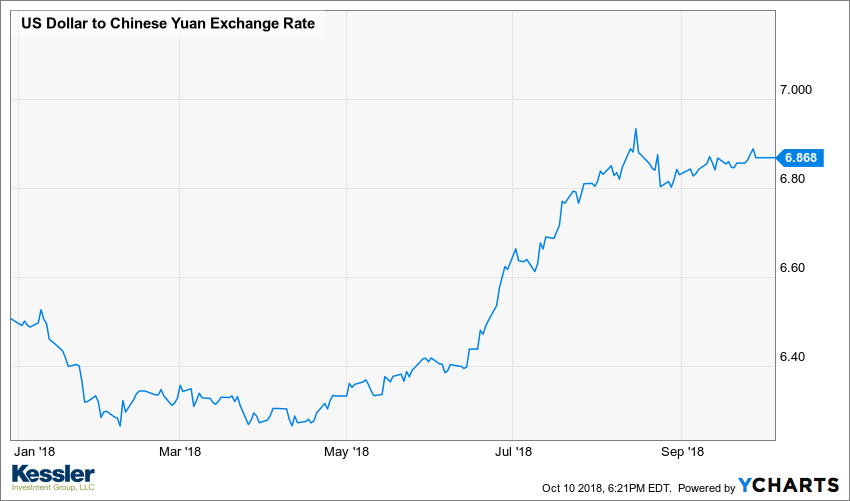 Furthermore, China has recently seen a move from a current account surplus to deficit. This means they are becoming a net borrower, rather than a lender, to the rest of the world. When a country moves from a net lender to becoming a net borrower, as happened to the U.S. following World War 2, it is a sign that the country’s economy is starting to see more consumption. The chart below shows how the current account for China has not only dropped dramatically since the beginning of this year but will likely continue for years to come. This suggests the Chinese consumer is going to demand more products from overseas most notably the U.S. This major shift could help explain the reason for President Trump’s tactic to negotiate trade now while the U.S. is growing and China is slowing. 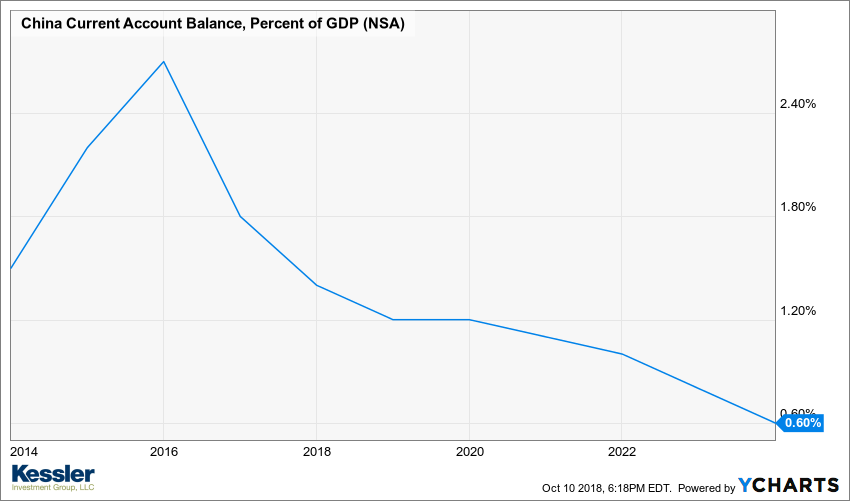 To understand the importance of this change, think about what happens when someone moves from a lender to a borrower? In this case, they call in their loans and bring the money home, right?. This is exactly what China is doing in the form of selling their U.S. treasury bond holdings and bringing the funds home. Anyone (China included) who buys a bond (like a treasury bond) is actually lending their money to the U.S. government. To “call in” that loan, one must simply sell the bond. This is what China is doing. As they sell bonds, it puts downward pressure on treasury bond prices and causes yields to rise.

We believe the effect (rising rates) of China selling their treasury bond holdings to repatriate the money they lent to the U.S. Government will not last much longer. As trade tensions abate (we believe it will go on longer than most, but not forever), China will return to their practice of buying treasury bonds. This will push prices higher and yields lower or at least put downward pressure on yields.

The main risk during this period of trade tensions is that the Federal Reserve ignores what we describe above and continue to raise rates on their own. We hope the Fed sees that the market is doing their work for them leaving no reason to proactively raise rates much further. At least until the market can digest the current level of interest rates.

So, while stocks will likely fall a little further from these levels, we do not see ominous signs of a “crash” or a recession. We continue to believe stocks will move higher into the end of the year and through the better part of 2019. In our managed accounts, we raised cash ahead of this weakness. We are now “chomping at the bit” to reinvest these dollars for our clients as we expect the selloff to be “short and sweet.”